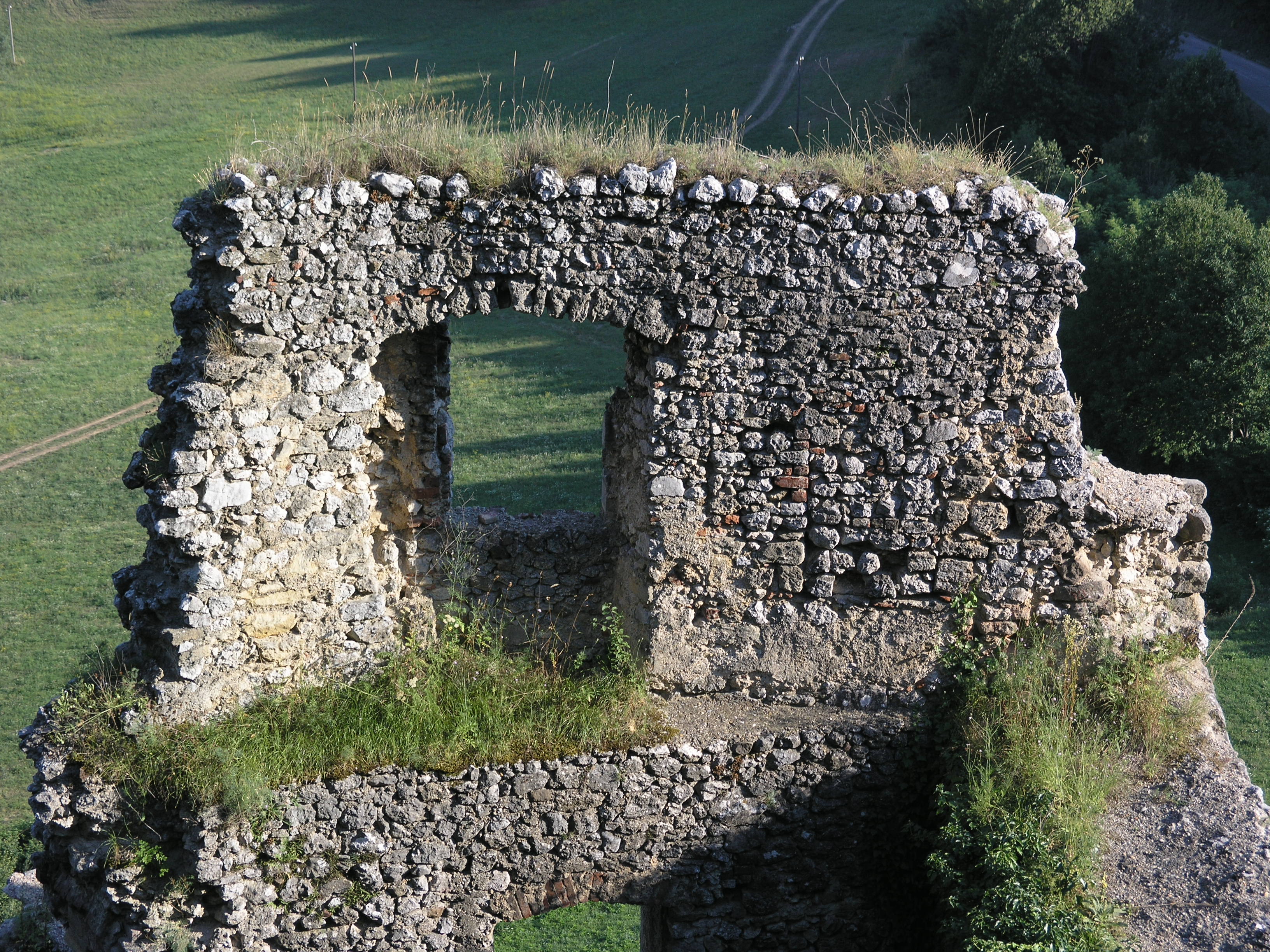 Hidden in the rocky hill of St. Katarina, between the sticking rocky summits of Vuklec and Vranilac, lies the impressive remain of the old royal town of Veliki Kalnik. Its oldest part lies on the very top of the Castle and is with the long wall, on the splitting place of two rocks connected with the impressive lower part of town – the palace. Remains of the chapel of St. Katarina lie on the bottom of the grand structure, close to the entrance.

It is impossible to determine with any certainty when the fortress was built, and no source before the Mongol invasion (in 1241-42) refers to it. When listing the lands belonging to the Zagreb prebendary in 1217, king Andrew II merely mentions Kemluk or Kemlich land; and in 1221, when he writes that his father, king Béla III, gave Kamesnicza to the bishop of Zagreb, he says that it lies at the mount Kalnik (sub Keymuk).

Nevertheless, there is no doubt that the fortress already existed when the Mongols invaded Hungary, because in a letter written in 1250, Béla IV refers back to the previous disloyalty of count Maladurich, who besieged the fort of Kemluk in 1242, when the king was at the sea. The king Béla IV has confirmed this supposition, saying in 1243 that prefect Filip Bebek, son of Mate, loyally and smartly defended the fort of Kalnik from both the Mongols and the rebels of Slavonia.

Veliki Kalnik remains inhabited until 17th century. Its owners were kings, governors, bishops, and noble families Alapić, Orehovečki (Orehoczy), Erdődy, Drašković i Keglević. Nowadays, Veliki Kalnik is an attractive location for hikers and climbers that have, on the walls of the castle ruin, established a climbing area with more than twenty more and less difficult routes. Over the last decade the Croatian Ministry of Culture funded and started work on the protection and preservation of Castle Veliki Kalnik, as well as research work on the south outer wall of the castle, all in preparation for development of detailed conservation documentation.

The noblemen castle ruin of Mali Kalnik, always in the shadow of its older neighbhor Veliki Kalnik, lies on the rocky hill-slope called Pusta Barbara (460m) northeast from Gornja Rijeka. Situated on barely accessible rock, the remains of the castle can be approached from the south, and a little harder from the north side.  Mali Kalnik is mentioned as an estate already in 1240, and in 1334 as a fortification. Since then it has exchanged many owners. Proprietors of the castle came from the higher nobility: Governors of Slavonia, the bishops of Zagreb, King Sigismund and his wife Barbara of Celje, known as a Black Queen. In mid-15th century Mali Kalnik becomes the property of Vuk Branković, followed by Vladislav Kosača who received it as a present from the King Mathias Korvin. In 1533 it changes hands and becomes property of family Gezthy, and from 1599 until 1730 the family Orehoczy. Once they finalized construction of the manor house in Gornja Rijeka in 1644, they decided to leave Mali Kalnik.

In 1985, 5.35ha of Mali Kalnik has been protected as a special botanical reservation. The paths to Mali Kalnik are leading from Gornja Rijeka, following the marked path through the village of Deklešanec, until the last house after which they continue north with a steep climb through the vineyards and forest. The castle ruin can also be reached following the south path of the Poučna staza towards the west, via the ruins of the church of St. Martin to the village Vojnovec, from which the path leads to the west through vineyards, following the forest path to the north until reaching the ruins.

Below Mali Kalnik, south from the centre of Gornja Rijeka, between two large curves on the road Križevci-Novi Marof, surrounded with the park of old trees and small lake, lies the manor house Gornja Rijeka. Family Orehoczy erected the castle in 1633. Following them, the manor house becomes the property of family Chamare, until 1863 when, following the death of husband, for more than two decades, the owner is countess Sidonija Rubido Erdödi known as a first Croatian opera singer (role of Ljubica in the opera Ljubav i zloba of Vatroslav Lisinski), as well as the first Croatian concert singer whose debut singing of Još Hrvatska ni propala was the first publicly performed song in Croatian language. The Countess Sidonija Rubido Erdödi died on February 17th 1884 and has been buried in the local church in Gornja Rijeka. Although of tremendous historical and cultural significance, the manor house in Gornja Rijeka is today standing and waiting to see some better days.

Ruins of the church of St. Martin

The remains of the church of St. Martin are lying in the forest west from the mountain hut and the village of Kalnik, some 40-50 minutes walk, under the huge rocky ridge. St. Martin is mentioned as the parish church between 1334 and 1501 when it is moved south to the centre of Brezovica (today Kalnik), and St. Martin becomes graveyard chapel. Restored in 1738 during the reign of CAR Joseph II. Today only some of the walls of the nave remain, where worshipers are leaving various items in gratitude to St. Martin. According to historian dr. Josip Butorac, under the big rock, only about twenty meters away from the chapel used to be a small covered atrium, under which there was an altar with the hole, where St. Martin was praying.

Various archaeological sites pointing at existence of settlements in the late bronze era have been discovered during the numerous archaeological explorations in the area of Kalnik. The findings lead to prehistorical era and Middle Ages. Just below the castle of Veliki Kalnik the remains of early bronze era, antique and Middle Ages have been discovered. Koštelj meadow below the castle hides the remains of the 17th century castle. Some of the findings from various archaeological sites and additional information are kept in the collections of City Museum in Križevci.

Long, deep gorge Vratno has first been mentioned in the documents of King Andrew from 1207 as Porta Lapidea (stone door). It is situated east of Kalnik on the old roman road to Varaždinske Toplice. Today, it lies on the crossing of forest roads to Slanje and Apatovec. In the gorge, there is a hunters lodge Vratno, earlier forester house.